I could play What Remains of Edith Finch a third time right now (I loved it so much that I make all my friends play when they come in my door), but I think the game’s trailers struggled — as first person narrative trailers do — to show what makes the game great.

This trailer introduces the heroine, provides context to the setting, has spot-on editing, top-tier camera work, and perfect auditory composition. But I want to talk about the one thing left unanswered.

Sometimes you pick things up.

(This is where the magic happens.)

As you pick up certain memoirs, you trigger a role-shift into that person’s shoes — at the most-permanent part of that person’s life: their death.

The PSX trailer (and the launch trailer) do a great job of framing this memento mori idea, but they chose not to show the player engaging these memoir moments. I mean, I get it. It’s a hard choice: do we show the player’s first-person gameplay (with all the drunk-wonkiness of movement — and time-constraints of gameplay animations), or do we wrest camera control and show the game’s beautiful setting instead?

By choosing setting, they got beautiful footage, but sacrificed the player’s voice (player-cam). I respect this decision. But I’d like to consider the player-cam option. Would this work? While I can’t guarantee that, I can guarantee they would have had a ginormous hot-sticky mess on their hands (though a potentially delicious one).

Player-cam movement shows the player’s role in a first-person game, but the tiniest little slip-up reads like it’s recorded by a teenager on their fourth Monster Energy drink. 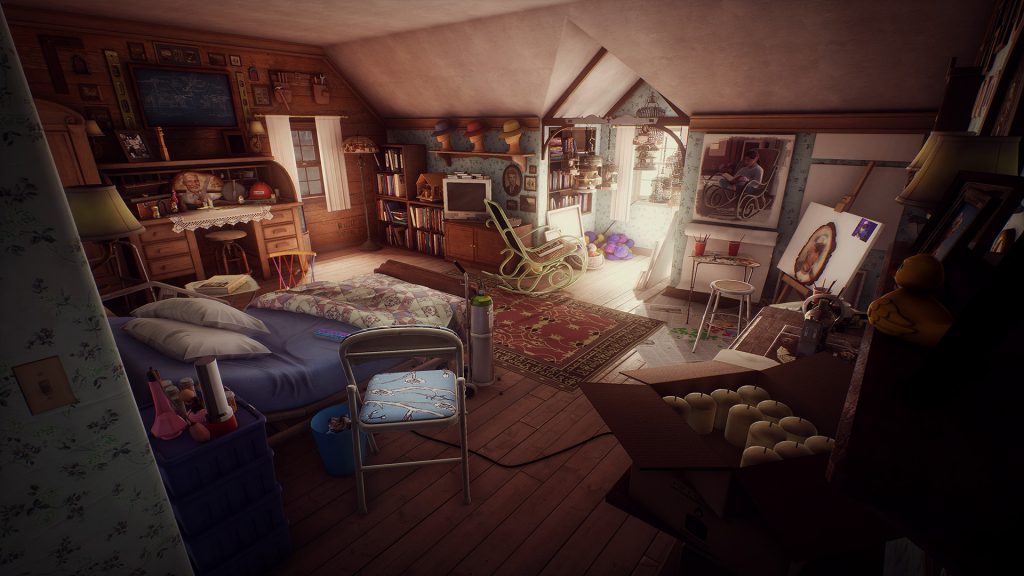 Pro-tip: never use a mouse to try to capture first-person gameplay. It doesn’t end well. PS4 and Xbox One controllers work well for getting smooth camera movement, but it still takes countless retries to get just right.

It’s an enormous pain. But I think it might be worth it.

We needed to show relationship dynamics in Anamorphine using just the player camera. Our reliance on player-camera movement meant it also took more hours worth of retries than anybody would expect from a thirty second trailer. We also were forced into this decision. Since the game doesn’t have any human voices, we had to show a “human voice” somewhere, so we opted for camera movement (and Beatrix Moersch’s phenomenally-brilliant sound design). The subtle bob of player movement further-captured the human-like movement we were after. And in the end, we captured just what made Anamorphine: it’s about moving towards, moving away-from, and processing a relationship with somebody special.

Watch any mainstream FPS trailer. Count the actual-gameplay shots. If it’s really good, it might have one player gameplay shot. And most of the time it’s just a gun shooting down iron sights to minimize any remote semblance of shakiness. While I’d call this a hybrid-approach, I still don’t get on a horse until I see how it actually rides.

We tried a real hybrid approach (smooth-cam + player-cam) for the the trailer of Bokida – Heartfelt Reunion. See if you can spot the moments that are (A) player-cam or (B) smooth-cam.

How many did you count? Every shot in the trailer was gameplay — honest, natural, un-debugged gameplay, but it doesn’t count to the viewer as “gameplay” until they can see the player’s voice — when the camera moves.

We used these teensy camera movements to hint at the player’s role, up until the real bullhorn moment at 0:31. The player takes control in a single camera tilt—that practically screams (by comparison to the smoother shots before it). Then we’re off to the races: the real player verbs that illustrate explicit gameplay.

Let me back-up a moment. A lot of work went into that one “small” tilt moment (it took me about 50 tries or more to get that two second clip just right). While I’m proud of the effects, it’s a tad disheartening to realize how many dozens of takes (and many hours of work) go into each of these shots. Still, the player-cam-effect offers a necessary window —  players might see themselves in those shots.

Let’s look back at What Remains of Edith Finch for a second. I’d love to say that player-cam footage is the solution to the communication problems the game faced. But that’s not the whole story, the whole story needs to be told just as it is: through a grander narrative than the momentary stuff.

A framing device might be the single-most powerful tool for first-person narrative game trailers.

For That Dragon, Cancer, we also committed to using a player-cam to frame everything, but more-importantly, we frame the game’s grand concept through a framing device: a baby toy called a See ‘N Say.

In a chapter titled, “I’m sorry guys, it’s not good,” spin the See ‘n Say toy to hear the thoughts of everybody in the room. Pull the picture with the fuzzy-bearded man with glasses to hear what the dad, Ryan, thinks about the doctor’s declaration. Spin the See ‘n Say on the brown-haired woman to hear what the mom, Amy, thinks. You also can hear similar thoughts from both medical caretakers in the room. We realized this toy could frame the whole game: pull the cord, hear a line from that parent. So that’s what we did in the trailer.

Interestingly enough, What Remains of Edith Finch also uses a framing device in their trailers. But because we don’t see the player interacting with this framing device directly (the house), the concept is lost.

It would have further complicated the trailer production should they have taken this approach. I’d actually love to speak again with Ian Dallas (Creative Director at Giant Sparrow) to see if they tried a more-literal gameplay approach that tried to employ the framing narrative. I’d love to hear about their trailer decisions to forego showing player-cam and framing-device interaction.

In the end, maybe it just failed to work.

Edith Finch’s trailers are fantastically produced, but since they they left too much to mystery, we can’t see how you play it. At the very least, they should have taken the hybrid approach: showing beautiful pre-composed shots (like they do), but also some of the player walking in the house (player-cam shots). In addition, we needed to see two memorial interactions (one to establish the action, a second to stress its importance). These moments would help players see themselves in the game, and better bridge that “what do I do” gap.

I get it, every genre comes with difficult trailer decisions: first-person games may be one of the hardest to show, because so much of what happens exists between your ears. Very few first-person trailers are enjoyable to watch when they’re entirely player-cam. And when they are, the work-load is exhaustive. Still,  I hope this article helps you strike a balance — as you sort-out the most-ideal technique for your game.

You’ll find my credits figuratively stamped at the end of over twenty one trailers this year. I’m quite proud of that number, 21.

Here’s what that includes:

It’s strange; seeing things in categories — realizing how many I just can’t quite share yet — or won’t get to at all. Still, it’s nice to realize that I’m not insane for feeling like I did more than that which can be seen.

MASSIVE THANKS to everybody who’s chosen to work with me. I couldn’t be more proud of our work together. None of this would be possible without amazing devs and their incredible games. Thank you, sincerely.

As for 2017 and the current queue of projects: I’m actually sad that I’m going on Christmas vacation and won’t be jamming hard on projects. I love my job. And I love what we get to create together.

We updated That Dragon, Cancer’s trailer last week to herald the new iOS version — I couldn’t be more thrilled about how this opens up the player audience. I’d strongly encourage any and all to check out this fantastic game: especially now that it’s on a platform many “non gamers” use for play.

Check it out: That Dragon, Cancer — iOS App Store 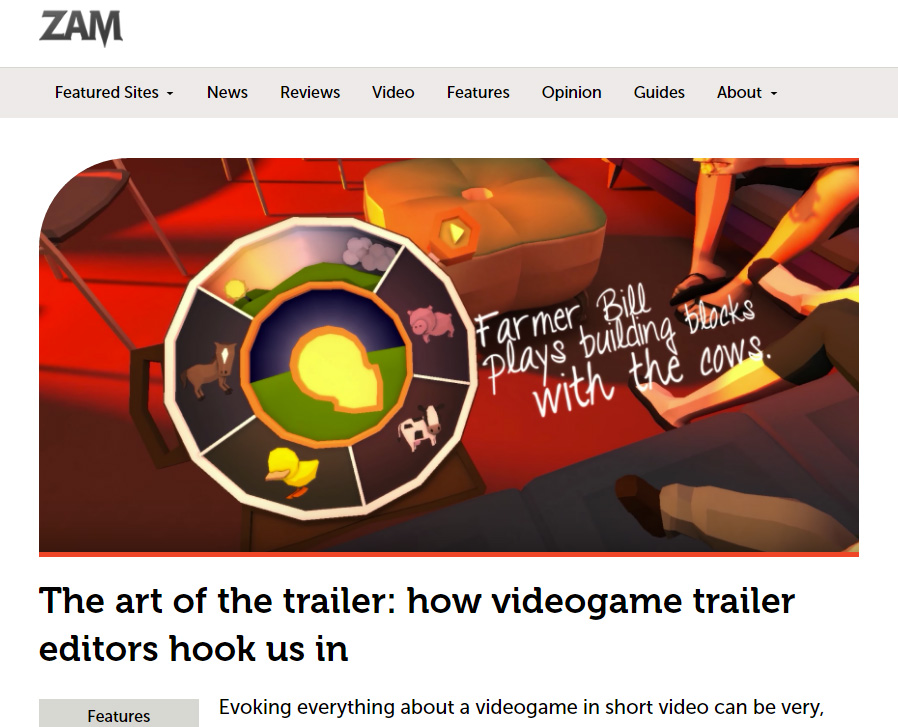 ZAM published an article about the trailer-making craft that featured a lot of input from myself and Derek Lieu. The article highlights my production goals for That Dragon, Cancer’s trailer — and how that informs the importance of emotional journey. You can also a lot out of what Derek says about his production of the Firewatch trailer, and some deep insights from Kuldeep Shah. Check it out.

The art of the trailer: how videogame trailer editors hook us in