Your game should connect with players on an emotional level. This is the only way players can feel your game before picking up the controller.

Since most games don’t have human faces for emotional readability, you have to get creative at bridging that emotional gap. I mean, just after birth we start reading other people’s faces. But we spend our whole lives learning to really read emotions. It’s a long road until we grow to feel what others feel, but this is emotional intelligence in a nutshell. And if you get really good at it, you may even become a good listener.

Crafting your game’s trailer requires that you become as good of a listener as you can be: discerning each interaction’s precise emotions. Fortunately, developing emotional intelligence for your game is not as hard as it sounds: it’s just a skill forged over time — and iteration.

Let’s get into the trailer emotion toolkit.

Create an “emotion” column in your trailer’s script. 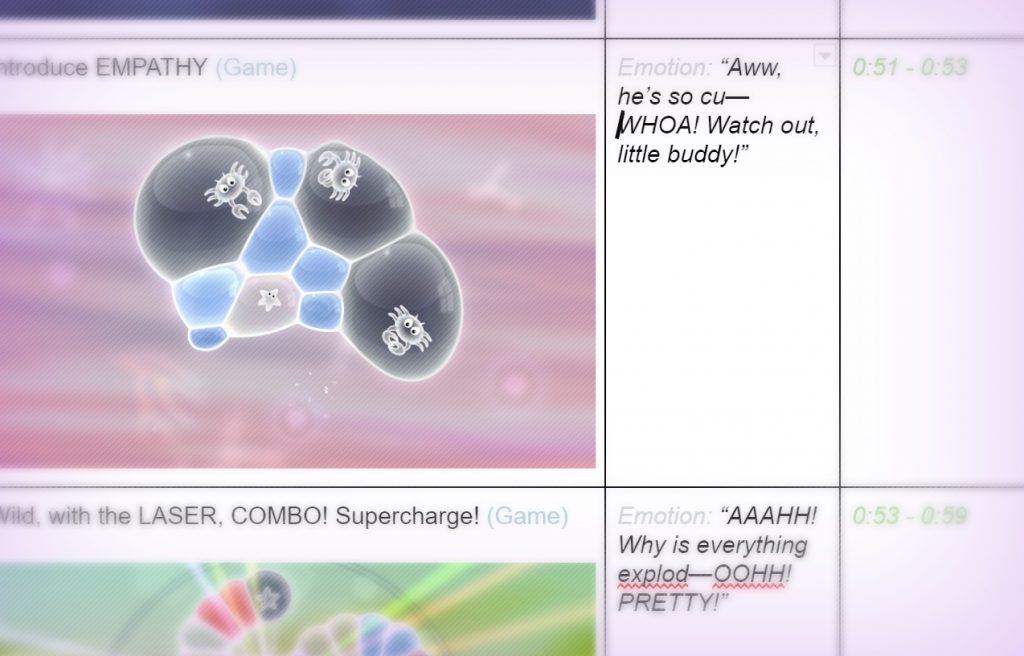 First you need to establish your game’s emotional vocabulary. Record some various gameplay. Or maybe just look at those GIFs you’re posting to Twitter that showcase key moments. Ask, “What’s the emotion here?” Write it down. Name the emotion. Maybe it’s, “Winking Fear of Death,” “Lips-Pursed Empowerment,” or “Holy Balls! What Am I Even Looking At?” It’s just a matter of thinking about the emotional intent of that scene. You might be wrong or inaccurate (we all read emotions differently), but starting with our first impression assumptions builds a place we can iterate on.

The most-helpful question for your trailer is, “What do I want players to feel… at this moment?”

Your trailer’s script works as a rubric: a lexicon of the full range of emotions you want to convey and contrast well-before you lay anything down in your working timeline. Slap all this information into a column on your game trailer script. This will be your springboard rolling forward.

Nobody cares about your facts — only how you make them feel.

I know game devs have a tendency towards the programmatic language of “features” instead of a game’s emotional benefits, but try to get past the features’ functionality.

Think about their heart-impact instead: “What will this feature make people feel?” Try to make them feel that. I mean, sometimes you have to state the facts. But discerning the heart of the feature will affect how it reads in the trailer. Like take what we did for Tricky Towers tournament update. We wanted to say “new tournament mode,” but this is how part of it came across in our trailer:

Granted, we had the advantage of player footage here, but it was our best tool for establishing the new tournament feature.

Say you get this: you’re feeling exactly what the players should feel for each of your features. You’ve already started mentally mapping the highs and lows of ‘how to craft a trailer’s emotional journey.’ It sounds like you’re actually ready to start showcasing with the most emotionally powerful moments from your game (we can tone it down if it’s too much). Let’s make them feel something.

Open on the most emotion-rich interaction. And iterate.

The bridge collapses at the end of the first shot in our Poly Bridge trailer. My toddler’s reaction to this breakdown moment? “OH NOOO!!!” That’s what we were going for, as it immediately leads to starting a new build from scratch. That sense of loss and retry is what we found endears engineer-type players the most to the game (and keeps them tinkering hundreds of levels in). But we tried at least a dozen different shots before we settled on this moment:

You can’t tell people how to feel, but you iterate on your emotional hypothesis until you get that ideal reaction. Keep trying intense shots until they feel like they land. Your opening is usually the hardest part of the trailer — and will be something you improve up until the trailer’s ready.

The best feedback you can request is precise guttural reactions. If you’re asking what other game devs think, remember that audience tends to be more systems-analytical and seem more like pulling teeth asking just for emotive insight. Instead, try asking games-unfamiliar audiences. Kids, family members.

Ask them what each shot makes them feel inside.

Once you have everybody’s emotional feedback, you can embellish on those emotions, or tweak the way your trailer reads in those defining moments.  This is where the dials get micro-adjusted and long-hours of refinement come into play. You don’t have to communicate emotions with words anymore. You should be reading (and adjusting) your shot moments based on pure emotive feel at this point.

Close on the sharpest gut-punch — of your game’s core hook.

The last thing you say before you leave the room is how people remember you. It’s one of my favorite moments in Seinfeld when “George Costanza” learns to leave on a high note. Leave them feeling all the feels, but do it on that one feeling you want to be remembered for. This was our exact approach for the conclusion for the Dead In Vinland launch trailer:

I typically ask devs, “What’s your most WTF moment?” Because that tends to be loud, outstanding, and memorable. But if it can call-back to the very special sauce about your game. That thing nobody else has done before? Oh man! That super crazy gun, or the way you can futz with time. Maybe it’s not a mechanic; but a theme. A narrative reveal. A call-back to the characters who does something really shocking?

Whatever is truly loud and special about your game, sock it to them. And if it doesn’t land at first, iterate.

Power Rangers turned playgrounds into seemingly drunken brawls because kids thought they learned real moves. It made them feel like karate masters.

This is the same psychological phenomenon you want to establish in others: make them think they know what they’re doing. It doesn’t matter if viewers don’t actually learn anything about your game.

As long as you make them feel it in their bones, you’re winning.