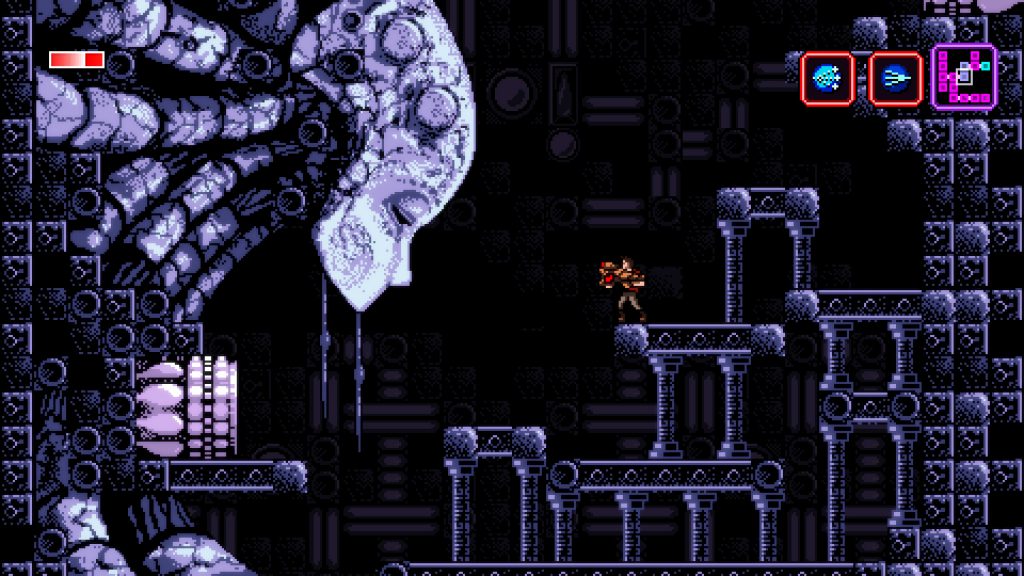 Axiom Verge sits near the top of my list of Switch games for two reasons: It subverts what powers you’d expect to get next, and it turns a video game essential into a framing device. First, it turns its unique save system into a major plot point. No spoiling, but imagine the potential of an egg shaped save station. Any time you die, the egg regenerates you: the “you” who just died. You remember everything up to your death — and get to keep all your new progress since the last time you saved.

In other games, death is a rewind or a “No, no, no. That’s not how it happened.” Then the story picks up as if your last actions never happened. In Axiom Verge, it did happen: you died and were reanimated in a Rebirth Chamber. That death is a part of your story. 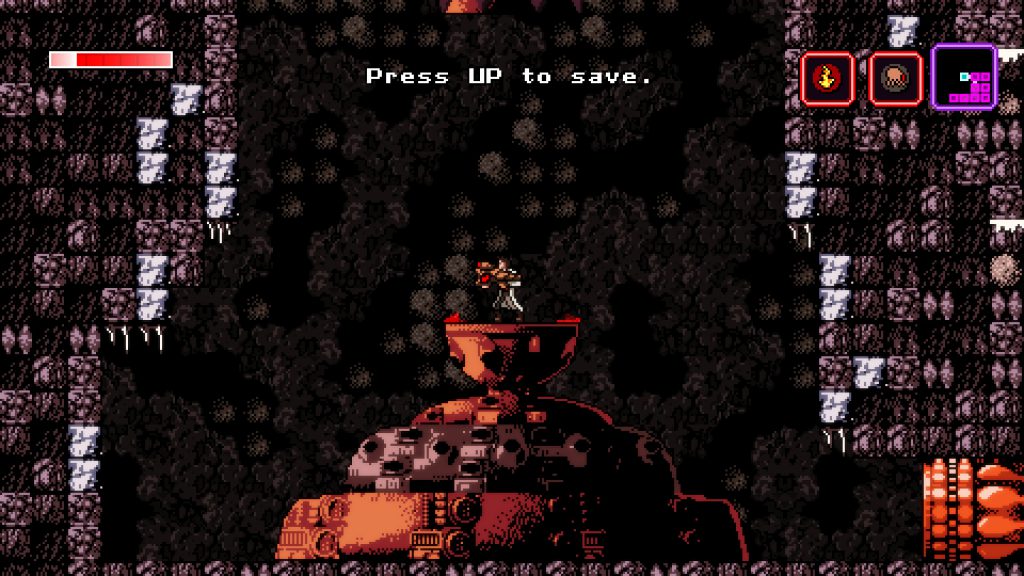 Shadow of Mordor uses this similar kind of death-remembering mechanic to frame its famous Nemesis system: while you are reanimating from death, the orc who killed you got a major promotion, maybe changed the whole orc hierarchy / ecosystem. Axiom Verge’s deaths don’t change everything, though: they go for something far more subtle.

Subtle implication seems the chief aim in Axiom Verge: the 8-bit-inspired graphical language suggests definition of every unsettling alien creature in the game’s hostile world. And of course this fares more loudly when you get your reliable secondary weapon: a wave of pure-glitch that reduces enemies to their bugged-out state. That’s all well and good, but the most disquieting element of the game is your monolithic alien-village-sized allies, the Rusalki. In fact, much as Axiom’s greatest mechanical influence is Super Metroid, it goes over Metroid’s head, direct to its inspiration: HR-Giger’s work in Alien. Thus, every encounter with life forms aches at a subtle sense of horror. 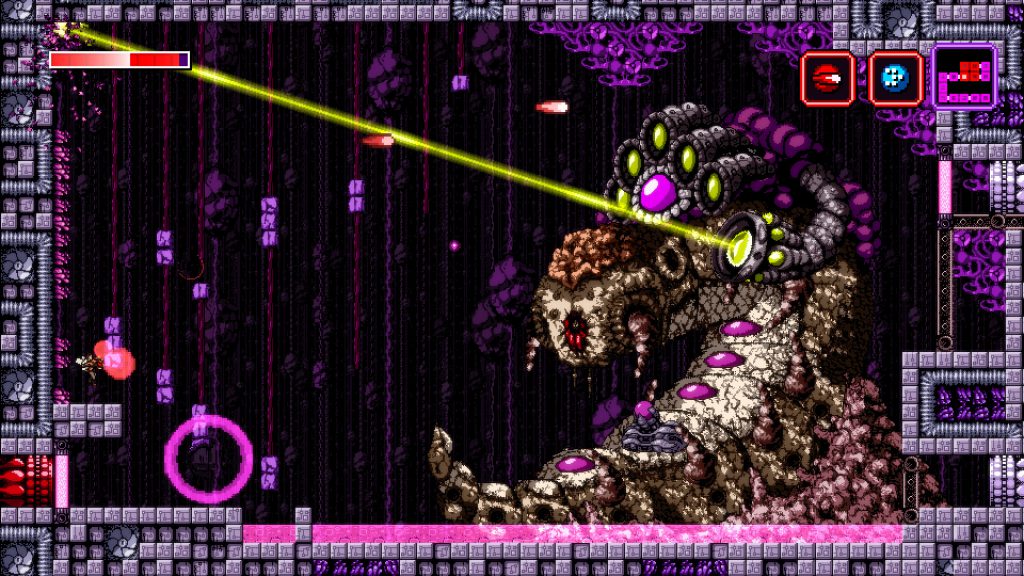 Tools and weapons serve-up this same trend of subtle subversion: Want to turn into a ball so you can fit into those itty bitty tunnels? How about a “cute” mite drone. See that ledge just out of reach? Need a double jump, right? Nope. Here’s a weird grapple claw shooting out of your body (I think). Need a new gun to bust through that wall in your way? Nah. You get a brown trench coat with a short two-tile teleport. You’re welcome.

What makes the trailer great

Let’s take a look at what Marlon Weibe did with the PS4 Launch trailer (which was used as a foundation for the others):

I just want to draw attention to a few moments. The first is the establishing shot: three simultaneous close ups of a bunch of science devices—with sound effects. This defines the “Axiom” name subtly by saying “it’s science stuff…” Narrative puzzle solved. Next, they establish the Egg save pods and perspective of the game—very smart, subtle way to establish the game’s genre. But that’s not enough, so there’s some basic jumping right after that. Genre established. Now you can do whatever. And that’s what Marlon does: focus on the game’s cut-scene art and press quotes.

The smartest thing about this first Jeff Gerstman quote is how it establishes that narrative surprise with better words than they could ever use. Gerstman says, “You think you know how Axiom Verge will play out. You don’t.” This is gold, because it adds credibility to the game that it couldn’t say or establish on it’s own. It’s undoubtedly why Happ and Weibe elected to go the press quote route. If you can’t say things well yourself, use other’s voices.

My biggest takeaway is the purposeful use of over-zoomed shots. The 300% zoomed-in shots where we see the player drilling, launching and activating a mite drone, or using short-range teleport to hop through walls. These mechanics don’t make sense to new eyes from a distance, so getting super close like this says, “You might not get why this is special yet, but trust me, it’s really a special tool that’s super different.” 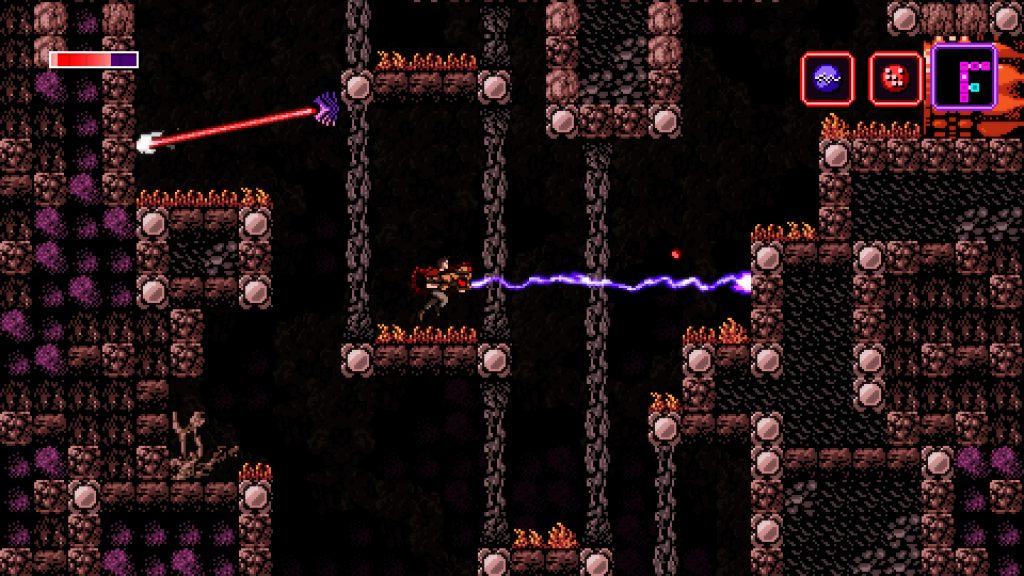 The last several shots (from 0:40-0:50) are ten shots in ten seconds. They’re far too quick for you to wrap your mind around them, but they’re there for one core reason: variety. They subconsciously say, “This game has a lot of action and variety.” And it’s relatively easy to throw a ton of shots into a trailer quick and call it a day, but Marlon’s composition here shows a deep understanding of shot-pairing harmony. It takes time to get this right, but it’s essential if you want to communicate depth and longevity to the game experience (the viewing player’s question of the value proposition).

The value proposition is an excellent place to end the trailer before the logo reveal, because it’s a close direct link to the viewer’s wallet. There’s other valuable ways of addressing this (I’m a fan of the “make them feel a powerful emotion they want to feel” approach), but this “Variety and Value” approach is Old Reliable for a Reason.

Axiom Verge is on just about everything, so if you have a way to play video games consider this a recommendation!

If you’ll indulge me, I’d love to talk about the game, Tacoma. After completing the game a few times, talking to Steve Gaynor, writing about the game’s relationship mechanics, and reading-up on Derek Lieu’s process for both trailers, I think I get what’s really special about the game.

Tacoma’s critical consensus seems to be, “it won’t make the same impact as Gone Home.” But it would be a shame if we didn’t celebrate Tacoma on its own terms: that of its unique medium for connecting with the characters. 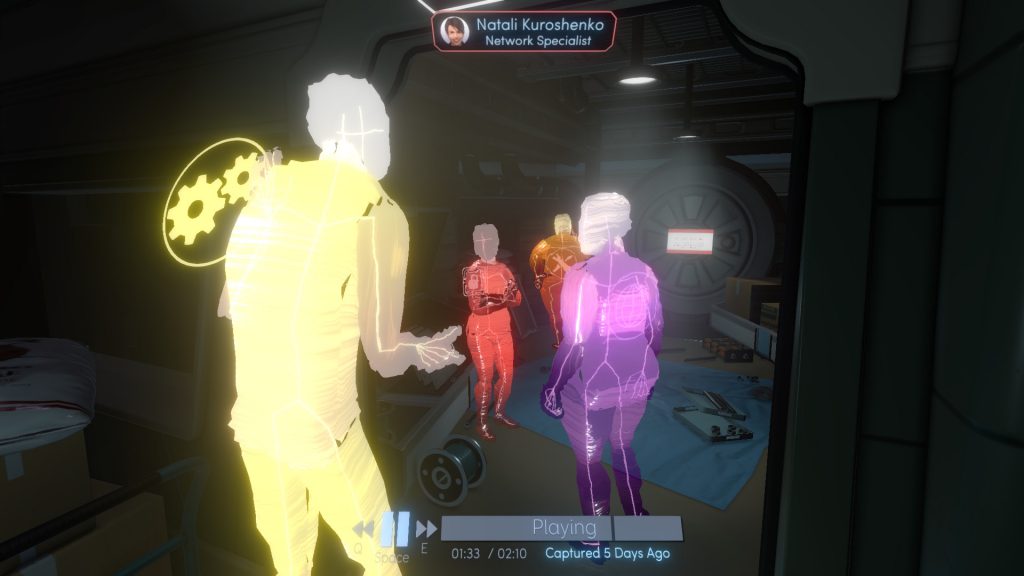 In Introverts Welcome: A reflection on Tacoma, I said:

Tacoma’s body-frame recordings are so special to me: I can engage, rewind, process them. I dream of the future where I can receive a recording from a friend or loved one that I can watch over and over, feel connected while not feeling like I have to immediately know what to say.

This creates an imaginative playground—that opens my mind to the possibilities of this new form of interpersonal communication. While I’m more-present with this in-game character than any game experience I can recall, I’m also daydreaming about the future of communication preferences for introverts like me.

There’s something beautiful about being able to feel connected to others, while also not being forced into being present with them, but rather electing to be there.

You can read the full piece if you like. 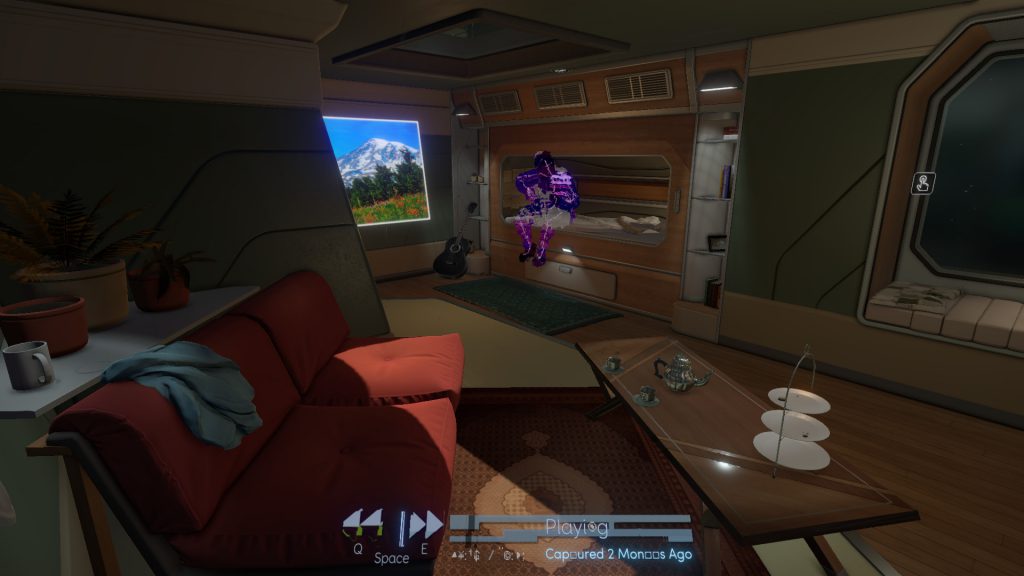 Motivations for designing a game like this really matters to me. So I was deeply excited when my buddy Drew told me Steve Gaynor wanted to come back onto our show to talk about what led to the design of Tacoma after his team’s work on Gone Home — and how his beliefs affected that. I was curious how they wove a story that diverged away from popular “Us vs Them” narratives. Be sure to add that interview to your podcast player of choice. 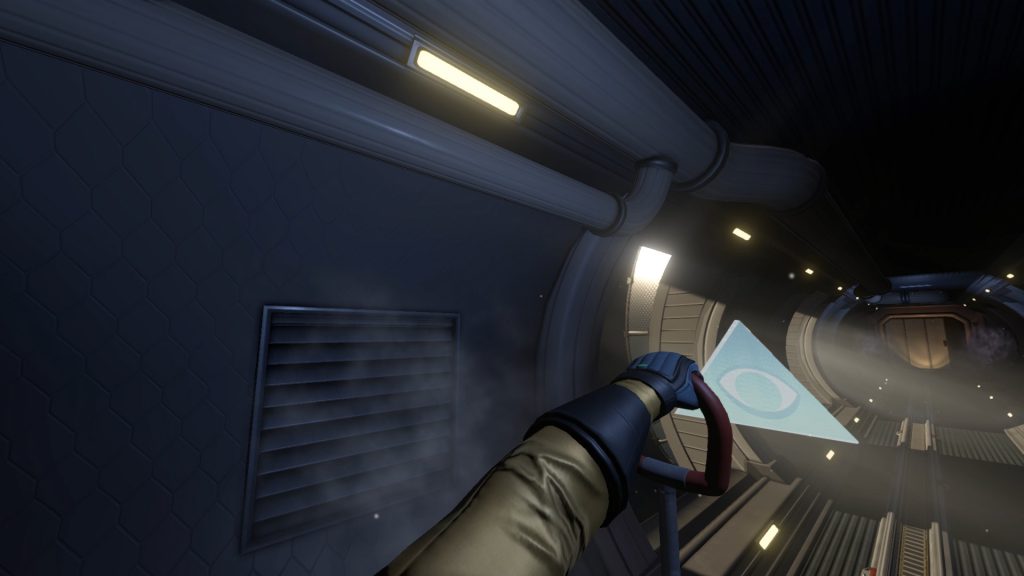 Since trailers are why you’re here, and what you want to think about, I’ll say that first-person narrative games are clearly Derek Lieu’s wheelhouse (especially after his work on Firewatch). So his writeup on the game capture process is pretty valuable, especially since it highlights what made Tacoma’s Launch Day trailer such a joy to craft. In Derek’s words:

At any point during playback you can pause, rewind or fast-forward the recordings. It’s necessary to do this because you can only hear conversations in your immediate vicinity. For game capture purposes, this meant at the press of a button I could rewind a scene, change the camera angle, and get a new take with a different shot composition.

Derek goes on to highlight the unique way he applied the Rule of Thirds, and some physical solutions for recording gameplay that way. I recommend reading his whole post. 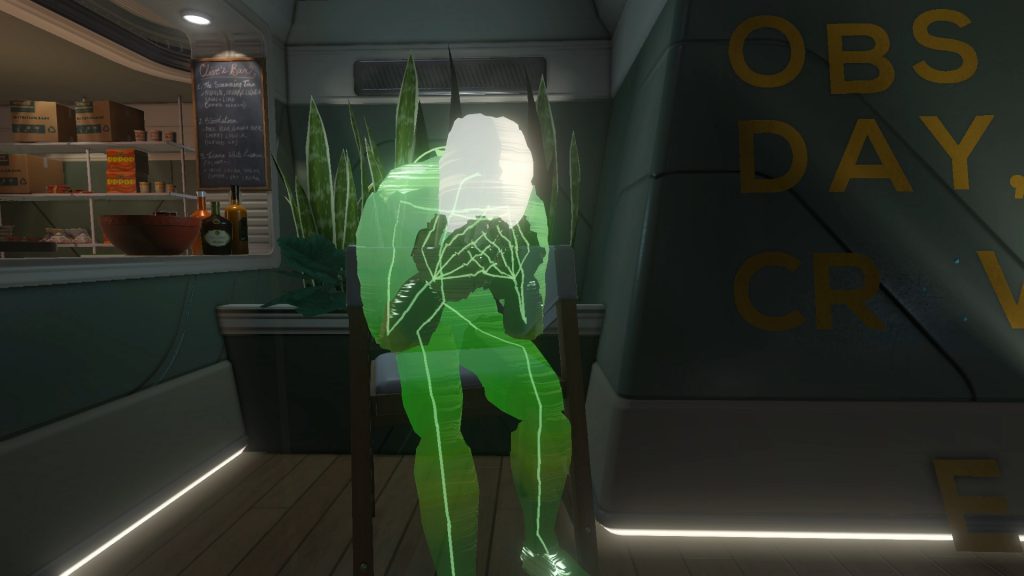 Derek also had the opportunity to make a shorter Launch Trailer for the game, and provides some sage advice for rapid turnaround, that largely comes back to game and project familiarity. Derek says:

I managed to do this on a Sunday in about 7 hours (with some breaks for food/cats etc.), with only a few small tweaks the day after. My familiarity with the game greatly expedited my edit/capture creative decisions, otherwise I never would’ve considered taking on a project with so little time available. 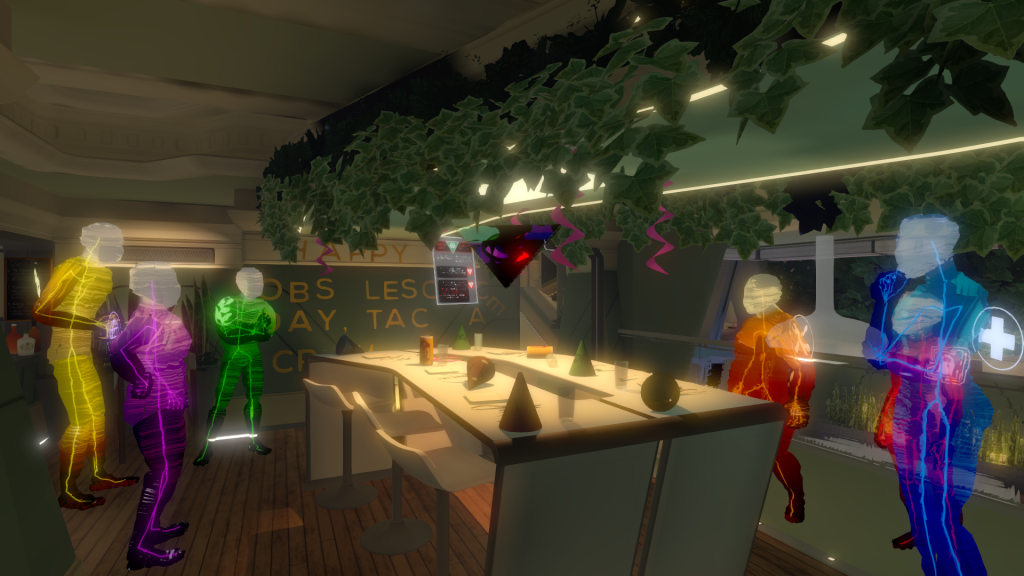 I loved this game, and I would encourage anybody thinking about a first-person-narrative game trailer to study this game and the trailer resources around it. Tacoma is available now on PC and Xbox One.

I recently had the pleasure of showing up on the Wardcast, a game business podcast hosted by indie game dev, Dylan Ilvento (Peak). We talked about a lot of things, but I’m recommending it for anybody who’s starting to think about their game’s trailer. I talk a lot about the importance of capturing a players emotional journey — and how one does that.

Listen in to this episode or subscribe to the Wardcast.

Topping out at one hour and seven minutes, it’s a listen ideal for a drive or a workout. But Dylan is a great host, so he draws the best trailercraft information out. Plug it into your Podcast player of choice. Let me know if you like it!